The first inhabitants of the Alpes de Haute Provence settled in the famous Gorges du Verdon area between Quinson and Moustiers-Sainte-Marie.

Research carried out by great specialists over around twenty years has made it possible to establish the presence of Man in the region as early as the Paleolithic Era. But most of the traces have been left by the Neolithic. Many caves or rock shelters above the course of the river were occupied by Man and his presence can be certified by a number of bone punches, ceramics, ochre mills.

Around Quinson, the cave of Saint-Maxime and the Points Rouges burial shelter are extremely interesting. The Baume Bonne cave is the most surprising as it has several successive levels of occupation which date back to the Lower Palaeolithic period and also a number of animal bones: ibex, horses, beavers, which help us to understand the climate of the times better. The Abri Donner is interesting for its black, ochre or red schematic or anthropomorphic paintings.

All these fragile testimonials to the day-to-day life of our remote ancestors, with reconstructions of their activities, are exhibited in the Museum of Prehistory of the Gorges du Verdon in Quinson.

The museum tells the story of Prehistoric times in Provence – the history and adventure of Mankind in the region.

The installation of this museum in Quinson, near the Gorges du Verdon was not due to chance. Thousands of people visit these sites which are known all over the world.

Where did the Verdon get its name? The emerald colour of the waters of the River Verdon (‘vert’ in French means green) leaves little doubt as to the origin of its name.

It rises near the Col d’Allos, at an altitude of around 2,200 metres, and runs down to the Durance, near Gréoux-les-Bains over a distance of 175 km and a drop in altitude of 2,000 metres.

A green torrent which is like a raging animal – getting near it is always an adventure. But 45 of these kilometres are famous for a more important reason: this is the Grand Canyon of the Verdon which is perfect for climbing and white water sports. 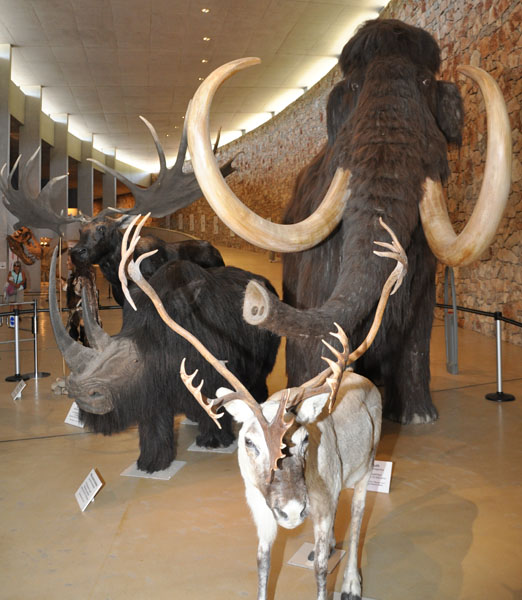 The setting-up of the Prehistory Museum of the Gorges du Verdon was motivated by the rich archaeological heritage discovered on the banks of the Verdon and which was, for over a million years, the territory of prehistoric men.

The most important part is the cave known as “La Grotte de la Baume Bonne” in Quinson which opens out 50 metres above the river. All the major stages of the life of Provencal Man are represented here.

Professor Henri de Lumley, who was at the time the director of the Natural History Museum, believed that it would be particularly interesting to group all these collections together in a single location not far from the archaeological dig in order to increase their potential and the manner in which they are presented to the general public.

So it was without any hesitation that the little Provencal village of Quinson, in the heart of the Natural Regional Park of the Verdon, was chosen for its location.

Designed by the English firm of architects “Foster and Partners”, the Prehistory Museum of the Gorges du Verdon blends harmoniously into the landscape.

The famous architect Sir Norman Foster, winner of the Pritzker Prize for Architecture in 1999, devised an elegant two-storey almond-shaped building.

The design of the Museum establishes a solid link with the surroundings of the village of Quinson, maintaining at the same time the contemporary character of the building which is integrated into the natural lie of the land in such a way as to appear almost buried in it.

The whole unit covers a surface area of 4,300 square metres and is one of France’s major museums of prehistoric times. 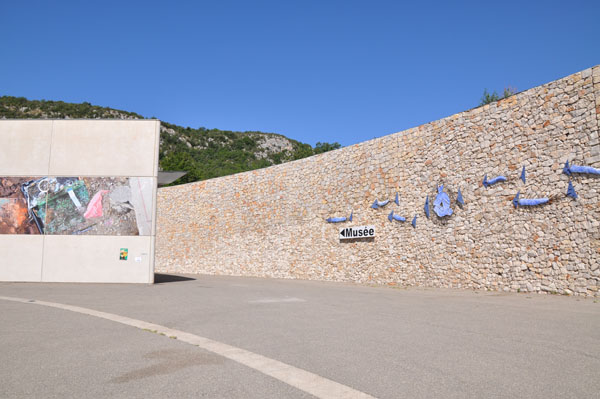 A museum which tells the story of Prehistory in Provence

The museum has several vocations:

19 topical showrooms on the mezzanine make up the museographic circuit and trace the chronology of the different prehistoric eras with various forms of presentation such as: 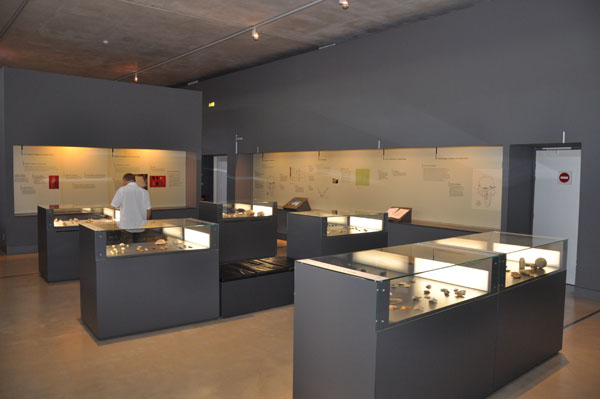 The themed trail of La Baume Bonne and the Prehistoric village

The Museum of the Gorges du Verdon is firmly rooted in its natural and cultural territory and the choice of its site is justified by the presence of around 60 archaeological sites which have been explored near Quinson.

A themed trail was created which links the Museum of Prehistory to the most important site of the region: the Baume Bonne cave. Its landscape-readings and a viewpoint finder give an insight into the relationship between Man and the environment through past millenia up to 21st century.

The trail follows the Verdon from the Museum through the prehistoric village where the dwellings of our ancestors at different points in time have been reconstructed, and the Neolithic garden. It then winds through the brush on the limestone plateaus and plunges into the gorges until it reaches the cave of la Baume Bonne.

This itinerary is offered as a guided tour by the Museum. Allow half a day to complete it.

There’s a whole host of things to discover during this Prehistory Day: